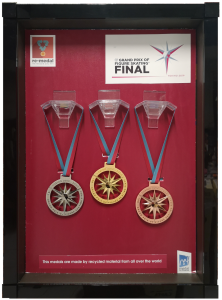 This project focuses on environmental sustainability and recycling, combined with a passion for sport. The debut is a great prestige, both nationally and internationally, as the ISU Grand Prix of Figure Skating® Final (Junior & Senior) 2019-2020 was held at the Palavela in Turin, from the 5th to the 8th of December.

The Italian Ice Sports Federation has entrusted re-medal with the awarding of the races: the winners will be able to wear a very special and eco-sustainable medal around their necks and receive a numbered certificate of authenticity indicating the countries of origin of the recycled material. For this occasion, re-medal created a design object of which the lines were designed by Carlo Spoldi, a well-known artist who was inspired by the image of snow and ice for the event to create a medal representing a snowflake.

“We are particularly honored to have been chosen and involved for the awards of the race” – says Nicolas Meletiou, Managing Director medal in frame

“I believe that, for a “layman”, for a spectator, the thing that impresses the most in this sport, as well as of course the enormous physical preparation that these athletes must have, is the elegance. The elegance expressed apparently without effort, the “light” of the movement, better, in movement; that they are able to have and transmit. Movement, elegance and lightness, are therefore the criteria that inspired me and that I tried to convey when designing these medals, referring in some way to three-dimensional elements present in some other artistic expressions. First of all Italian Futurism with its “Unique Forms in the Continuity of Space” and then the “Mobiles”, the sculptures of Alexander Calder. All these suggestions summarized or reinterpreted sometimes within a circular shape, typical of a medal or in the general synthesis of a star. Of an “ice star”, which these athletes are.”